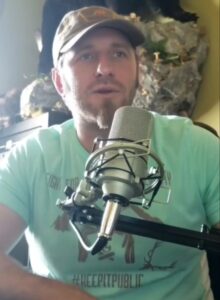 Cable has long been a respected voice in the hunting/outdoor community through the syndicated Lone Star Outdoor Show radio show and podcast. He has a BA in Radio, TV & Film from the University of North Texas. Cable and Chisum met in college and have remained close buds for nearly 20 years.
In these pressing times however, there’s much more to say than can be said in an outdoor format and quite frankly issues that don’t belong on an outdoor specific show. Over the past five years or so the pair have spent countless weeks together in the back country pursuing elk and wade fishing the south Texas coast for speckled trout. The conversations that take place in those settings generally stem from one central concept – “pursuit”. After wrestling with the idea of doing another project for several years the calling to say what needs to be said could no longer be ignored. The result is Justified Pursuit.
Cable is a devoted husband of 12 years and father of 3. 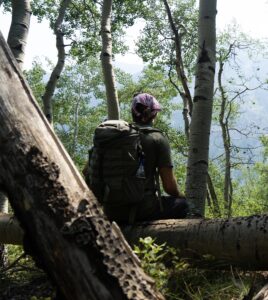 A Christian, husband, father of four, proud American, proud Texan, and avid outdoorsman. He was raised in South Texas, and mentored in all things by his father and maternal grandfather, both United States Marines. His paternal grandfather, who passed away when Chisum was a young boy, fought in WWII and was awarded two Silver Star for his valor. This lineage shaped Chisum’s world view and drives his passion for protecting the American Constitution and way of life.

Chisum is a licensed attorney with an extensive background in administrative, regulatory, contract, and general corporate law.  He received a bachelor’s degree from Baylor University in 2003 and a law degree from the University of Tulsa in May 2007.

After serving as an Environmental Attorney for the Texas Commission on Environmental Quality (TCEQ), in 2009 Chisum joined a global energy and environmental engineering & consulting firm with its U.S. headquarters in Houston, Texas.  Over the next five years Mr. Cooke worked his way to U.S. Operations Director.

In January 2015, he joined a small waste processing company as General Legal Counsel, and is now working to install waste minimization and resource recovery projects in various industries across the country.