Episode 47: The Biggest Political Scandal of Our Lifetimes Starts to Unfold, Border Patrol Does Their Job While Kamala Refuses to Do Hers & Prominent Lesbians Fight for Abortion Rights?

Michael Sussmann, a 57-year-old cybersecurity lawyer who had worked for the Democrats and Hillary Clinton’s presidential campaign, pleaded not guilty in federal court on Friday in his first appearance following his indictment on charges of lying to the FBI in a 2016 meeting where he shared information about the Trump Organization and Russia. Information that has sense been proven false. Chisum and Cable give their take on what this means going forward and speculate on whether more individuals will be charged in this investigation.

The situation on the Texas border came to a head this week when mounted border patrol were used to round up Haitian immigrants. The liberal media even made allegations that agents used whips to help beat/subdue the illegals. An allegation that VP Kamala Harris apparently ate up hook, line and sinker as she encourages an investigation into the mounted border patrol’s pursuit of illegal immigrants trying to cross into Texas from Mexico. Don’t worry, the irony of her comments isn’t lost on us.

Speaking of irony, everyone’s favorite anti American lesbian Meghan Rapinoe again draws the ire of Cable as she and other well know Lesbians storm the castle in an attempt to defend women’s rights to have abortions. 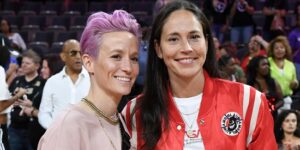