Episode 79: Why is the Military Digging in On Failing Covid Vaccines? FBI Corruption Lets Sussman Off The Hook & The Guys Disagree on How Many Americans Are Really Paying Attention

United States Air Force TSgt Mickey Matusik has held out on the Air Force covid vaccine mandate for months on end. However after his religious accommodation request was officially denied, it appears his 17 years of service (11 active duty/6 reserves) will come to an unwarranted end. Cable’s good friend and neighbor was more than willing to come on the show to discuss his frustration with the situation.

The rest of the world has moved on and generally accepts the reality that these shots are inept at best. So why is the Air Force still dug in on forcing members to get jabbed? The guys discuss in detail and Mickey sheds light on his current No Points, No Pay status and whether or not anything is likely to change for him and so many other servicemen in the same situation.

Next, the guys dive into the depressing news regarding the Durham Investigation as Clinton Campaign Lawyer Michael Sussman was acquitted of lying to the FBI. Chisum explains how the FBI’s own internal corruption is responsible for letting Sussman off on a technicality. This conversation then leads into a disagreement on how many American citizens even know or care about the Clinton Campaign’s attempt to sabotage Trump’s presidential run and subsequently illigitimize his presidency. 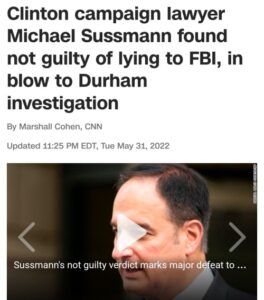